Instead of a red carpet the sculptors graced the plastic temporary footpath of the Central Boulevard of the Carlton Gardens. The mood was happy as would be expected of a well received exhibiton - we had made 9 sales by the close of business of the first day of the exhibition. The guest viewing of the exhibition took place after 4pm on Wednesday 26th March at the Gardens and then we all moved on to the East Imperial Restaurant to celebrate and to hear our Judge, Rod Sanders give his verdict on the prizes.

The exhibition is in three sections:


Carved Work - work in marble, timber, limestone and alabaster was shown. Carving generally takes the longest and is a more difficult skill - and this is reflected in the fact that there are twelve works in the section.

The second section is devoted to formed work where the sculpture is modelled in a softer material and then fired or cast or coated as the material requires. There is a huge range of work shown from bronze to mosaic with a similar diversity of techniques and ideas.


First prize in this section was given to Aleida Wright for her "Musicians" - a work in raku fired clay. As a musician himself Rod was interested to know what these three would be playing next.

There were two Highly Commended awards made in this section: Todd Stuart's "Shhh.... Don't Tell Anyone" and silicone bronze and stainless steel and Graham Duell's "Elder" in fired terracotta clay.

The third section is devoted to assembled or fabricated work - here the artist can indulge in scale at a price unobtainable in other techniques - and can incorporate recycled materials and found objects to their heart's content.

First Prize in this section went to Mark Cowie for his "Somewhere Out in the Universe". This work is made from mild steel and red gum.
﻿﻿﻿

Rod Sanders awarded three High Commendations in this section:
to Lawrence Marshall for his cutlery "Wake Up Call",
to Alastair Mason for his recycled metal work "Chook Chaser" and to Rudi Jass for his Cosmos #2 in Corten and stainless steel.
﻿


Acknowledgements are owed to our curator Mark Cowie, to the support of IMG - the organisers of the Melbourne International Flower and Garden Show, the committee of the Association of Sculptors of Victoria and the volunteers who worked to make it happen, to Bulleen Art and Garden who sponsor prizes and have this year and for the past few years supported the demonstration events and the People's Choice Award. Also Art Services for sponsoring prize money and the presentation event. This year we employed a professional photographer - who supplied these images and the rest of the show which will be posted on the main ASV website shortly.

Posted by Sculpere Newsletter at 27.3.14 No comments:

Sculptors at the Melbourne International Flower and Garden Show 2014: The Set up 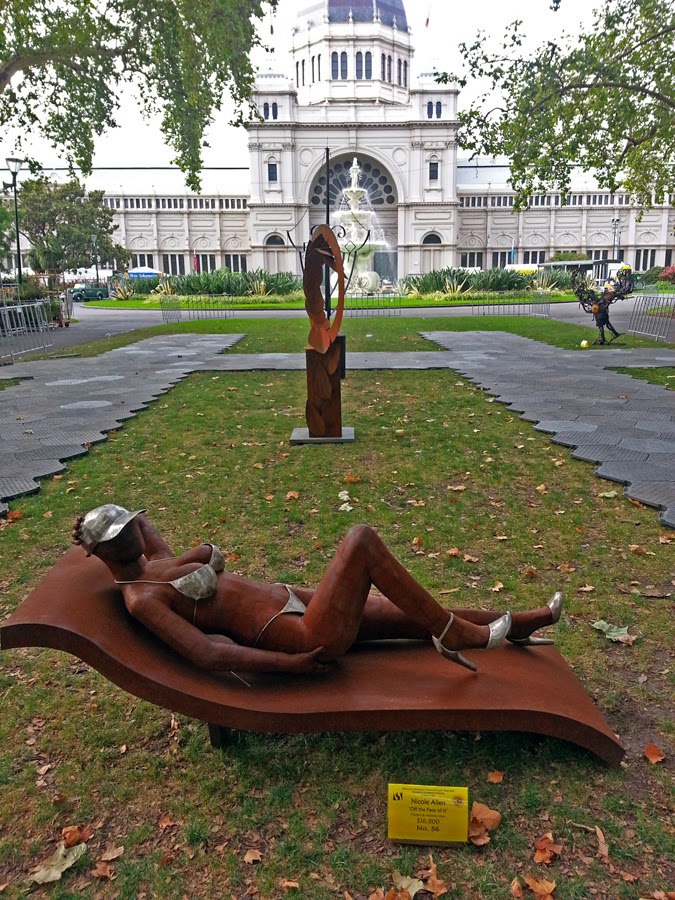 It's great being back in the Carlton Gardens setting up for the Flower Show - a meeting place for sculptors who live in far flung places in Victoria and a return to the sight of the Royal Exhibition Building and its grand fountain.

The work came in over the weekend - and by Sunday afternoon was ready for Judge, Rod Sanders to assess the work. You'll have to wait until the presentation on Wednesday evening to find out the winners in the three sections. We will be Tweeting @Sculptors_Vic and on Facebook Association of Sculptors Victoria.

﻿
Our curator has been flat out naturally - but a busy, creative person can always fit work in - so here is Mark with his sculpture.

Clad in Hi Viz jackets the sculptors came and went and the exhibition grew. Here is John Bishop with "Embrace #3"

Saeed Shojaee produced a serious work - the personification of grief as an older woman with the changes of time marking the depths of despair.


Posted by Sculpere Newsletter at 23.3.14 No comments:


"In art nothing is the result of pure will. Everything comes about through docile submission to the forces of the subconscious" – Odelon Redon

Gillian Govan has been showing work at MIF&GS for a while now - here is her story of how her work came to life:

I enjoy the full process of creating art although I don’t think of it so much as a process but as an evolvement that begins with the first seed of an idea to be developed manipulated and built upon.

I work in a studio that is large and airy in the city. I have plenty of space to spread my work and store finished pieces. As with most artists it is not particularly tidy. I also make sculpture in a very large shed in a beautiful inspiring part of country Victoria.

I completed a diploma of Art and Design at Moorabbin Tafe in 1992 and Batchelor of Fine Art Degree in 1995. This training helped me to look at and understand the work of other artists, past and present and encouraged me to follow my instinct with my own work. It is difficult to pin point specific influences, as my work is so diverse in subject matter and the mediums I use. It is so varied that many artists and styles have influenced and inspired me, but mainly I draw on my own intuition and inner drive. Art is my passion but life is too short to do all I would like to do. Passion for making art does not always reap rewards but gives a wonderful inner satisfaction.   I have had many turning points but I think the most significant was when I commenced my formal art education and was able to diversify my styles and make sculpture as well as paintings thus accepting that art is not specific to one particular form. Art is Creating.

I joined the Association of Sculptors Victoria in 2001 and have exhibited works in most of their exhibitions. It has given me the opportunity to meet other sculptors and share our experiences.

My main focus is now working in Cold Bronze and Bronze and the works are mainly figurative. This year I am entering the Melbourne International Flower and Garden Show with a small piece titled “Bracing the Elements Together”
Posted by Sculpere Newsletter at 20.3.14 No comments:

Issa’s birth place in Cote d'Ivoire in West Africa has ancient animist roots which predate the arrival of Islam from across the Sahara and Christianity during the colonial era. The spiritual connection to the natural world are passed on through intergenerational stories, poems and music and are expressed in myriad sculptural forms in bronze and wood and are often incorporated in masks as well as architectural pillars, chairs and other functional objects. Unlike the static, emotionless, totemic figures seen in some other parts of the world, these are often evocative of profound emotions across the spectrum of grief, anger and joy.

In his contemporary sculptural expression Issa draws on his West African cultural and artistic heritage as well as his life experience to create large figurative sculptures which evoke strong and positive feelings. The integration of the ‘old/ancient’ with the ‘new/now’ is subconscious but clearly present. The masculine media of mild steel is transformed to the feminine by Issa’s flowing forms including soft dynamic curves. While each piece is deeply personal embodying a part of Issa’s essence, Issa hopes that each sculpture can speak to its audience without accompanying narrative or explanation.
Posted by Sculpere Newsletter at 17.3.14 No comments: 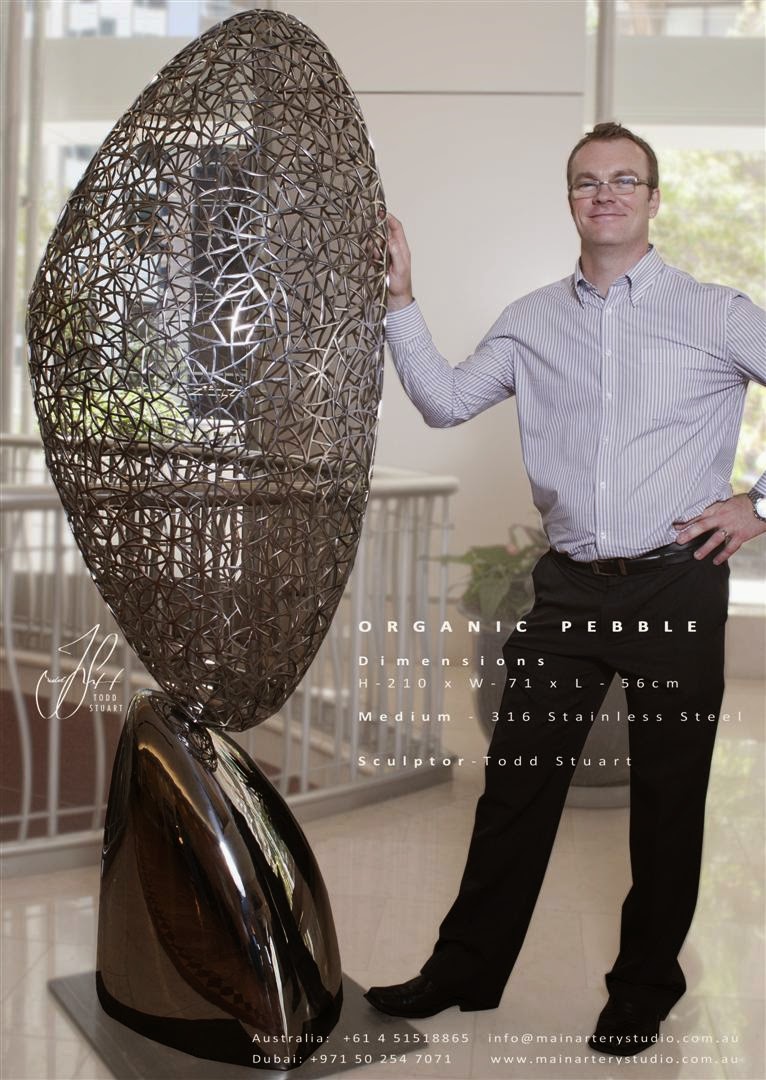 Todd Stuart is bringing his beautifully finished work to Melbourne International Flower and Garden Show for the third time now. Every year he's surprised us with a new idea.
Here he talks about one of his two works in the 2014 show:

I enjoy creating forms that have a desirable mix of emotions. I find that many shapes formed in nature contain this mix of emotions and that engage and inspire me. Take for example a pebble that has been shaped and polished after years on the floor of a river bed, it contains many compound and soft changing curves but also many different planes of shape. At first glance nature shows us an object that is harmonious, balanced & calming with its soft natural asymmetry. There is nothing aggressive or offensive. But then a second observation of emotions is experienced, subliminally there is a dynamic energy created from the many hidden angles & planes so cunningly hidden by nature’s soft curves & organic shaping.

It is by these same principles I believe we can also be inspired to create beautiful objects that bring us feelings of peace & harmony but also subliminally radiate a dynamic uplifting energy which can only be good for us to gain new effectiveness in our lives. I hope through my creations that I also may enhance the environments of others as they subliminally feel the benefits I have described above.


Posted by Sculpere Newsletter at 17.3.14 No comments:

I hope this note finds you all well and enjoying sculpture time. It is so hard to juggle our lives to find time to be creative, but I hope you are on track with work for the International Flower and Garden Show and then our Annual exhibition in August.
Read more »
Posted by Sculpere Newsletter at 6.3.14 No comments:

﻿﻿﻿The February Meeting
How many of us feel our expression is limited by our technical skills? In answer the January meeting was a come and try day at Andrew Bryant’s studio at Boneo.
Read more »
Posted by Sculpere Newsletter at 6.3.14 No comments:

ASV meetings are being held in the Ashburton Baptist Church Meeting Rooms, enter from the Marquis Street carpark Melway 60D9
Read more »
Posted by Sculpere Newsletter at 6.3.14 No comments: 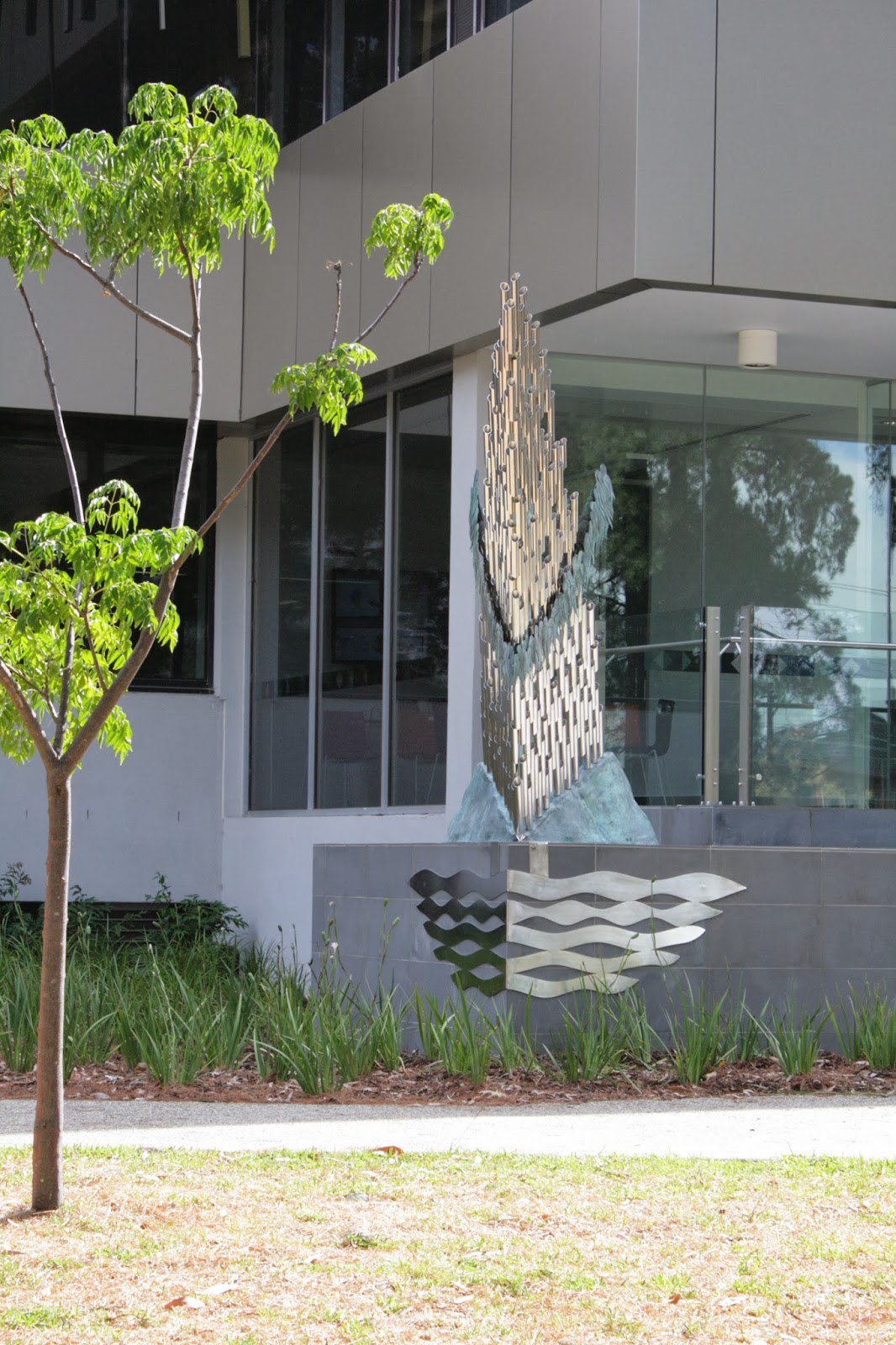 The work is at YVW’s newly renovated offices in Lucknow St., Mitcham, in front of the building on a purpose built pedestal. The freestanding part is about 2.5 metres tall plus the ripples applied to the base adding another 700mm or below the top of the base. The materials are stainless steel and copper. 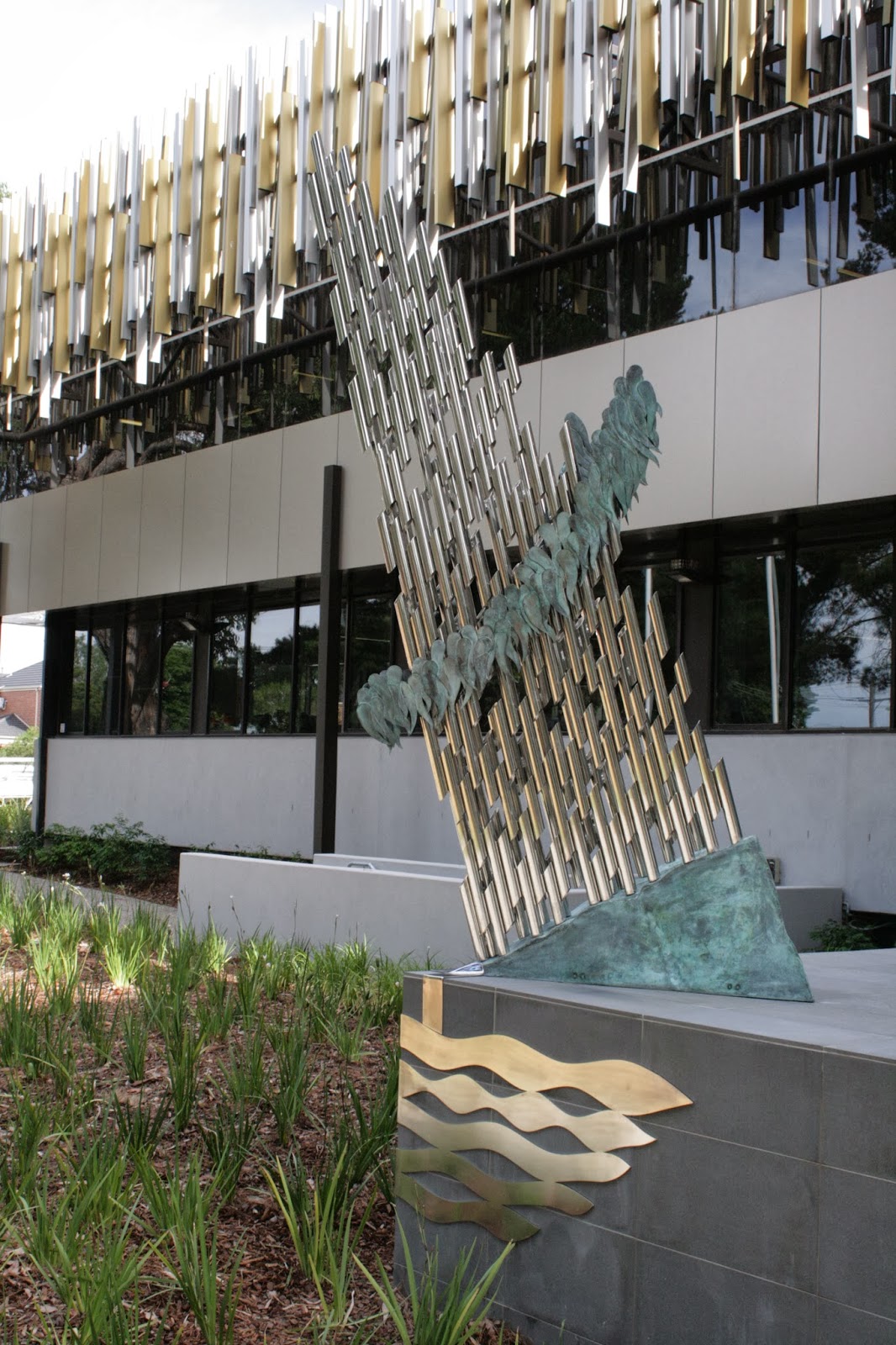 Posted by Sculpere Newsletter at 6.3.14 No comments: 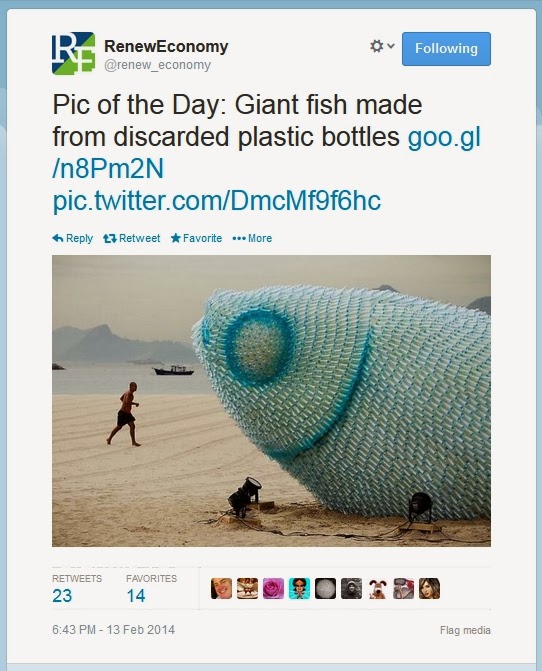 Take a look at the giant fish sculpture made from discarded plastic bottles for the Rio+20 talks. http://reneweconomy.com.au/2014/pics-day-giant-fish-sculptures-made-discarded-plastic-bottles-40881
Read more »
Posted by Sculpere Newsletter at 6.3.14 No comments:

Opportunities - here, there and everywhere

You can exhibit in the CAS Brooch Show, A4 Art Australia, study woodcarving in Portugal or exhibit in Spain... read on...

Here is a random selection of news - all of it worth reading.

Read more »
Posted by Sculpere Newsletter at 6.3.14 No comments: