The Perplexed and the Ridiculous

Exhibition Entries Saga
So you have your idea or the sculpture’s already made. 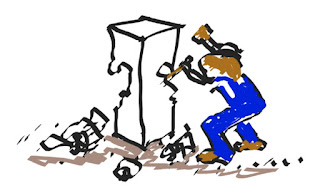 Remembering that our best resources are our own members you can look forward to the next few months. We’ll meet in the community meeting rooms of the Ashburton Baptist Church. Enter the building from the Marquis Street carpark. We’ll start at 7:30pm

21 February let’s kick off the year with a "show and tell" bring some work to talk about, or a problem to brainstorm or a suggestion for social media publicity.... or even an offer of help for the program? 7:30pm at the Ashburton Baptist Church Community meeting rooms

Unfortunately we have had a change of judge for the exhibition - but fortunately Graeme Wilke of Qdos gallery will be our judge for 2018.

Get your entries in! http://sculperenewsletter.blogspot.com.au/p/melbourne-international-flower-garden.html

Herring Island was a great show - the work was a diverse range of media and ideas... and all of it deserved to go to good homes. In the end only five works were sold. Congratulations to Hugues Scheid, Veronique Derville (2), Liddy Wright, and Bruce Webb. We must have handed out close to 500 People’s Choice voting slips.... that’s a lot of interested people. The last day of the show was cancelled on Parks Victoria’s instruction because of high temperatures and north wind. That’s just the way it goes on the island in the summer. Images are online at https://sculptorsvictoria.asn.au/exhibitions/view_exhibition/2018-herring-island-summer-arts-festival

History for the ASV

we need a team to pursue our History project people to source grants, expand on a brief, develop ideas for presentation - anyone who can help in any way please contact Gillian Govan president@sculptorsvictoria.asn.au
Posted by Sculpere Newsletter at 31.1.18 No comments:


Posted by Sculpere Newsletter at 31.1.18 No comments:

All Sorts of News

Could someone please visit the NGV in the next month or so and give us a report on the first Triennial. 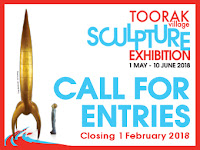 The ASV opened on Herring Island on 13th January - the weather was kind and the rain held off until the opening formalities were over.

Guests were greeted by the one man band Uptown Brown - he really lifted the energy of the event.

The opening of the ASV show "Meander" was also the launch of the Herring Island Summer Arts Festival. Speakers at the opening were Robert Lee, coordinator of HISAF, Gillian Govan, Immediate Past President of the ASV and CEO of Parks Victoria, Chris Hardman.

The title of the show "Meander" inspired some of the artists in their work - for others meander was a reflection of their career path. However it impinged, the island encourages everyone to meander amongst the works in the gallery, the sculpture placed around the island and the restored "natural" bushland the result of work by the Friends of Herring Island and Parks Victoria.

﻿﻿The first sale of the exhibition went to new member Hugues Scheid, with "Dédain - Disdain" being promised to a new home. So far (end of day four) we have sold five works and received lots of people's choice votes - a well received exhibition.
﻿

Images of the works in the exhibition can be seen here.

Images in this post from Jackie Mackinnon and Jenny Rickards


Posted by Sculpere Newsletter at 24.1.18 No comments: