I am Paul Cacioli and have taken on the daunting task of managing this year’s ASV Sculpture Exhibition at the Melbourne International Flower and Garden Show. The MIFGS is run by a company called The International Marketing Group (IMG) and they kindly sponsor us by providing the site, services and some of the prize money. They also provide some promotional help through Hot House Media who organize all the promotions for the Show as contracted by IMG.

This time next month we’ll be in the middle of the Melbourne International Flower and Garden Show - preparations are frantic in some studios.... Invitations to the presentation event and preview will accompany this newsletter.

If you are not exhibiting and would like to be involved in the show - and get to experience it close to - you can volunteer to "sit" the show or work in the demonstration event. Please contact Paul Cacioli asv_mifgs@sculptorsvictoria.asn.au 0429 575 299 if you can help.

The work that will on show is looking great - we look forward to an impressive and inspirational show. 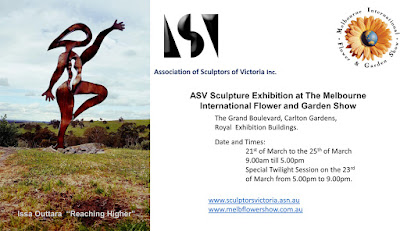 Posted by Sculpere Newsletter at 27.2.18 No comments:

We meet in the community meeting rooms of the Ashburton Baptist Church. Enter the building from the Marquis Street car park. We’ll start at 7:30pm


14 March after a well attended meeting at Dean Bowen’s studio on 21 February we feel we are on a roll - both new and familiar faces filled the space - it was great to see you all. In March we’ll have a talk by John Bishop on his artistic journey in sculpture. See you at 7:30pm at the Ashburton Baptist Church Community meeting rooms

21 to 25 March - MIFGS - we hope to see you exhibitng and/or at the prize presentation.

We will try to make the rest of the year as exciting as our first 2 meetings. Please send your ideas to Gillian 0412 122 884. Another studio visit? A Foundry visit? Life drawing class? Love to get your ideas and help in organising.
Posted by Sculpere Newsletter at 27.2.18 No comments:

A Visit to Dean Bowen's Studio

Read more »
Posted by Sculpere Newsletter at 27.2.18 No comments:

When she died some years ago, Thorry took on the responsibility of donating $1000 each year towards the Thomas Prize in memory of Margaret.

He was an enthusiastic supporter of the ASV in this way and attended many of our Annual Shows.

He was a successful businessman and an adventurous sailor who remained a sympathetic and approachable friend of the ASV.

Posted by Sculpere Newsletter at 27.2.18 No comments:

The News - in no particular order

Plenty of news for everyone! Exhibitions to enter, exhibitions to see, expressions of interest and news in general - such as:﻿


Meridian Sculpture Foundry is offering workshops in wax working and bronze casting - you can see their program here: http://meridiansculpture.com/sculpture-modelling-workshops/  It’s worth noting that Meridian’s prizes at last year’s Annual Exhibition included a workshop - there’s something to think about! You can also follow them on Instagram meridiansculpture
Read more »
Posted by Sculpere Newsletter at 27.2.18 No comments: